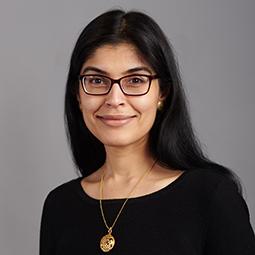 Erum K. Sattar received her Doctorate in Juridical Sciences (S.J.D.) from Harvard University where her dissertation committee consisted of Professors Mark Tushnet, James Salzman and Amartya Sen. The late Professor John Briscoe was also a member of her committee. Her doctoral research spanning law and policy focused on issues of water federalism and trans-boundary water sharing in the Indus River Basin.

At the Friedman School and the Tufts Institute of the Environment, Dr. Sattar leads and teaches in the multidisciplinary Sustainable Water Management Program (SWM) that draws together colleagues and disciplines from across Tufts University. Her current research is focused on the impact of climate change as it disrupts water availability and the legal and institutional structures that societies need to design to adapt to growing environmental stresses ranging across floods, a warming climate, and long-term droughts. Her work is centered on studying water both as a physical as well as a historically constructed shared and governed resource that has significant implications for economic development and political economy, food security, political systems and migration patterns, and the stability of ecosystems.

Evolution of Water Institutions in the Indus River Basin: Reflections from the Law of the Colorado RiverUniversity of Michigan Journal of Law Reform 715 (Erum Sattar, Jason Robison & Daniel McCool) (2018)